Getting resources or performing complicated operations is usually both slow and expensive. The ability to store results of cumbersome operations to prevent them to happen again is called caching, which is the topic of this article.

It took me just three episodes to become inconsistent in my writing schedule. It has to be a record of some sort. To keep me motivated though I decided to spend the season back in Italy, so that I desperately needed to practice some English.

Well it’s not entirely true: I am passing the season here because of food. As usual, this leads me to this article’s topic: caching.

Readers right now are probably divided into two groups: the one knowing the famous joke about caching and the others. For both of you here’s a curated list of tremendously sad variations of it.

Needless to say, I find all of them hilarious.

Either way, this piece is going to be part of a Christmas series about caching techniques. I am about to cover active caching (as in, what I can do to cache without suffer too much) and passive caching (as in, how to stick with browser cache and similarities).

This article is the first in the Active Caching part.

What is this about?

Do you still wonder what has food to do with caching? You’d better do, else I need to seriously improve my cliffhangers skills.

Let’s start with a simple out-of-IT problem. It’s Christmas eve and you’re planning to arrange a mouthwatering dinner for you friends and family. For the sake of the argument we’re going to use one traditional Italian Christmas recipe: “il capitone”1.

You can see by yourself how inconvenient this is, don’t you? What you start doing then is buying in advance and storing stuff in a more convenient place, closer to where you actually use it, to make the access to these ingredients more efficient. Let’s call this place cupboard.

Once you realize you can store things at home, you might be tempted to call the delivery person just once to collect all the ingredients not only for Christmas but also for New Year’s Eve’s dinner. So when you are at the fish shop, you buy the eel and the king prawns which you are actually planning to prepare a week later.

After a couple of days, the funky smell killing any living being in the area makes you realize that probably prawns are now expired and you should have prepared them fresh.

Well, caching has exactly the same kind of problems and perks: we usually cache items to save some computations, time or to avoid calling uselessly an external data source, but we should be extremely careful about expiration of entries because they can eventually get to an inconsistent (and very smelly) state down the line.

As usual, let me introduce some jargon2 which will help us in communication before diving into the patterns (maybe strategies is a better suited word here).

These are the participants:

In our previous example, these roles are mapped this way:

Unfortunately naming convention for these patterns is not that consolidated, so you can find them under different names.

To get an understanding of how does work and why we should use them, we will analyse the following scenarios for all the aforementioned patterns:

As usual, we are tackling these strategies in isolation for sake of simplicity. In real world, those techniques are combined to get the best out of them.

Cache Inline (aka Read Through)

The reason for this name is that in this pattern the Client is never responsible of calling the Data Access Component directly, but instead it delegates the responsibility of knowing whether a cached entry is enough or a fresh entry is required to the Resource Manager.

Resource Manager then sits in line between Client and Data Access Component.

Following the numbers on the arrows, you should easily get a grasp of what’s going on here:

As you can see, using cache here is reducing the number of steps, hence the strategy is actually working!

From a caching standpoint, this approach makes sure that we are caching only data we actually use. This is usually called lazy caching. This approach also promotes splitting responsibilities across different components, how can it have drawbacks?!

Well, unfortunately this is the case :(

The first issue is of course that, when you are in a Cache Miss scenario, the request has to do a longer trip before getting to the Client, making the first request actually slower than if we didn’t have cache at all.

One way of dealing with this is doing a cache primer: when the system starts we pre-populate the Cache Layer so we’ll always be in a Cache Hit case. Obviously this will make our caching mechanism not-so-lazy. As always, what’s best depends on the actual scenario.

The second drawback is that, since data is cached only once (on Cache Miss) data can become quickly stale.

Again, this is not the end of the world: as for food, you can set expiration for entries. It is usually called TTL (namely Time To Live). When entries are expired, Resource Manager can call again the Data Access Component and refresh the cache3.

As opposed to Cache Inline, Cache Aside will make the Client responsible of communicating with Cache Layer to understand if a Cache Entry is needed or not.

The pseudo code for this behaviour can be as easy as: 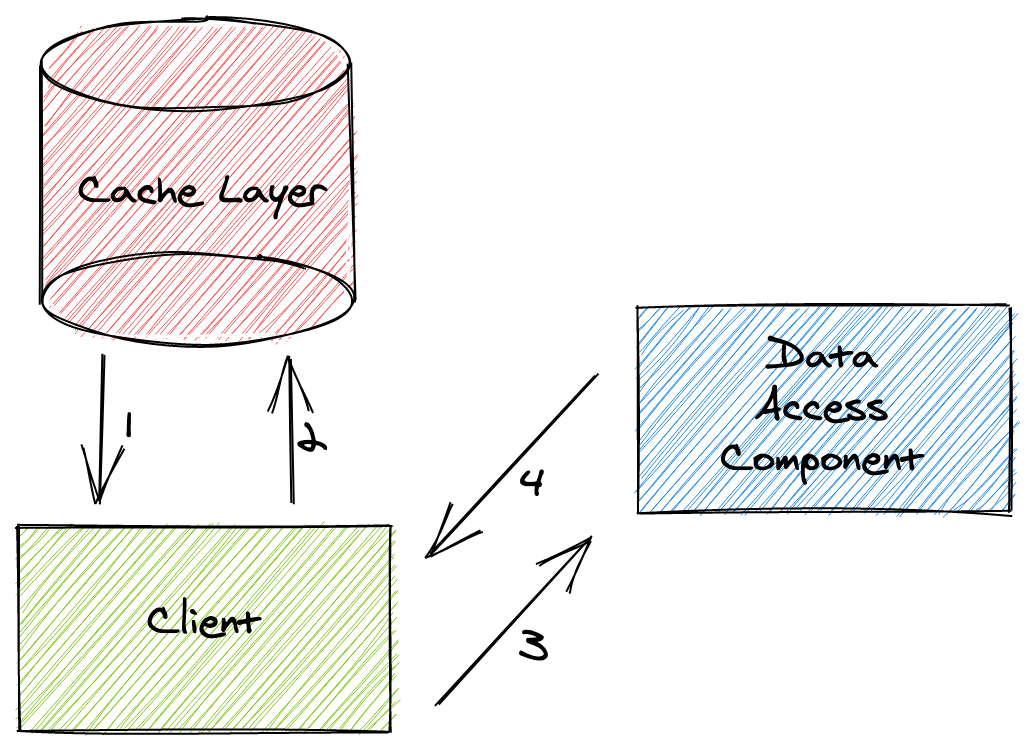 You can follow what’s going on here by looking at the pseudo code above. As you can see, responsibility of calling Data Access Component is now in the Client and the Cache is actually… aside. 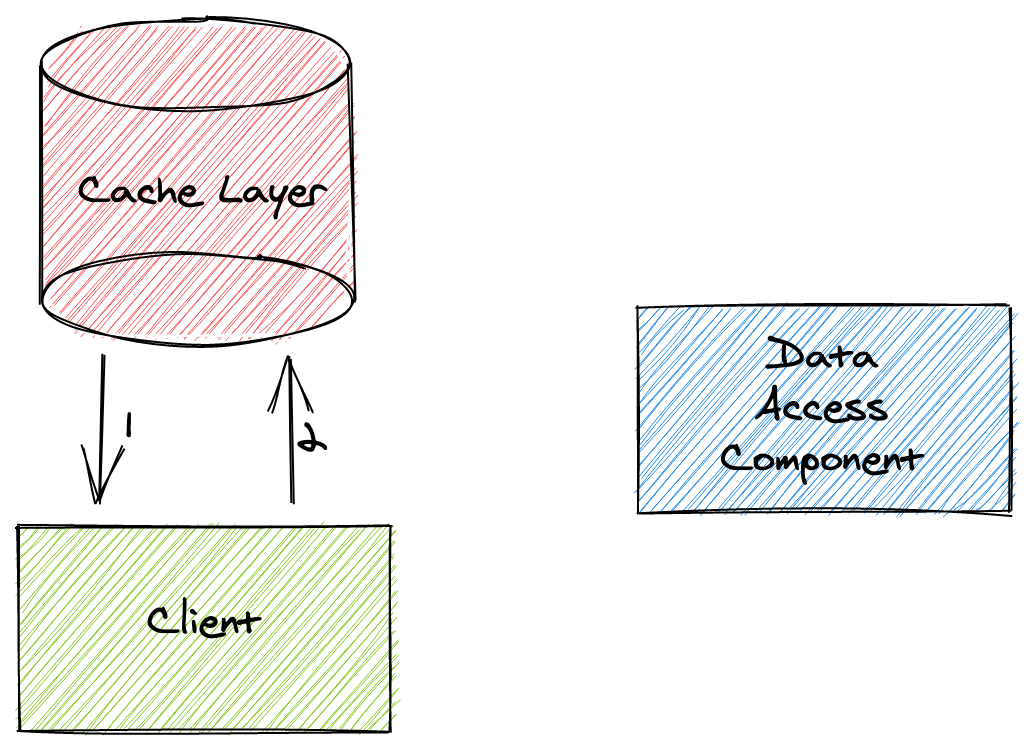 Again the trip here is shorter, so the pattern is actually working.

This technique, as Cache Aside, is a lazy caching technique, unless we want to do a cache primer. Also, exactly as with Cache Aside, there is the problem of stale data, but again that problem can be tackled with TTL.

So, why should anyone go for Cache Aside over Cache Inline?

Since the Client now is responsible of communicating directly with the Cache Layer, when the Resource Manager fails, we pay a penalty only on the first request - when we go through the Cache Miss path -, making our system on the whole more robust.

This will indeed widen the spectrum of what you can achieve with cache: you can, for example, hydrate or transform cached data to gain on performance on multiple operation with just one cached entry.

Let’s give an example of this.

Suppose you are serving a list of bank transactions you get from this AwesomeBankAPI. Your application is supposed to expose two different endpoints: getAllTransactions and getPayments. Of course AwesomeBankAPI does not expose any filtering function. What you could do is storing the the list of all the transactions on the first call to any of those endpoints.

Code or it never happened

You can find a more detailed version of these examples here

The example I am showing here is written in Node. It’s a simple application meant to communicate with XKCD to fetch latest comics.

CacheLayer in this example is represented by a simple Map. I am using a CacheManager to deal with it, so that if you want to experiment with a real caching engine (like redis, or memcached) you can do that without much effort.

The DataAccessComponent is represented by a simple XKCDClient which exposes (in a Vanilla JavaScript fashion…) only a getLastComics method.

The other component is indeed ResourceManager which is being used only in the inline-caching example.

Since all these components are eventually the same, I just created two different clients sharing and using them in different ways, based on the strategy we want to follow.

The Cache Inline example is about requesting twice the same resource (namely, last three XKCD comics), but the second time the request is way faster. This is because we are not doing any cache-primer, so the first time we are actually calling XKCD API, the second time we are retrieving information from the cache.

The Cache Aside example instead, shows how powerful can be caching when we want to request resources which can calculated from what we already have. In this specific example, we are fetching last five comics from XKCD and then we are fetching only last two. The second call of course is not calling the API.

The main difference here is then that we are using the cache to get a resource we didn’t have before, rather than using CacheLayer to get something we already fetched.

Again, those two strategies can (and usually do) live together. If you want to play a bit with these examples, you might try to make the ResourceManager from the first example a bit smarter so that it can either use the entries as they are (hence, what’s already in the repo) or it can try to extract the required info from CacheLayer and decide whether calling the API or not.

This closes the first episode of this Christmas special (yes, as TV shows).

As you might have noticed I am trying to keep this shorter and easier than usual, so you can easily follow without your laptop when you are hallucinating because of Christmas-sized food portions.

As always, if you have any feedback (the thing is too simplified, you miss my memes, I suck at naming things), please drop a comment and make this better together :D